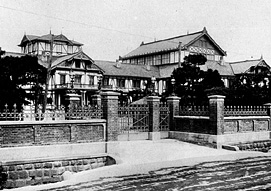 The Imperial Diet from "Views of Tokyo"

The National Diet Building most people think of today is a symmetric, imposing granite stone building with a tower at its center. Completed in 1936, it is perhaps one of modern Japan's best-known buildings. For 46 years, however, the Diet was forced to use temporary buildings since holding its first session in 1890. The temporary buildings looked altogether different from the present house of government.

History of the Temporary Buildings

In October 1881, following an imperial announcement on the future opening of the Diet, the Japanese government began to examine the construction of a building in time for the first Diet session scheduled for 1890. To start with, a large-scale construction plan was conceived that included buildings to house the various governmental ministries and agencies. The government, however, was forced to give up the proposal due to fiscal and time restraints and instead decided to construct a temporary Diet building

The first temporary building was completed on November 24, 1890, just one day before the Imperial Diet was convened. The structure was located at 2-chome, Uchisaiwaicho, Kojimachi-ku, Tokyo-shi (present-day 1-chome, Kasumigaseki, Chiyoda-ku (Chiyoda Ward), Tokyo, where the Ministry of Economy, Trade and Industry is now located). It was a two-storey, Western-style wooden building with total floor area of 8,469 square meters including an annex. The construction and fitting costs were 233,868.795 yen and 21,107.121 yen, respectively. There remain very few photos of this building due to a fire, believed to be caused by a short circuit, which saw the building burn to the ground on January 20, 1891, less than two months after its completion

Immediately after the disaster, the construction of a second temporary building was started and hastily completed in October 1891. Almost the same as the first temporary building―a two-storey, Western-style building―it had a total floor area of 16,016 square meters including an annex. The construction and fitting costs were 229,424.102 yen and 25,129.5 yen, respectively.

Like its predecessor, the second building also burned to the ground in September 1925. Soon after, construction of a third temporary building was initiated and the building was promptly completed as early as December. It was also a two-storey Western-style building, this time with total floor area of 20,839 square meters including the annex, and looked much the same in design to the first and second buildings. The construction and fittings costs were 1599,974 yen and 482,969 .32 yen, respectively. This third temporary building housed the Diet until 1936, when the construction of the present Diet building was completed.

All the photos on exhibition are of the second temporary building.

Inside the Diet Building

Inside the Diet building, Diet members were required to keep their dignity and retain order at all times. For example, for the maintenance of order within the Diet building, the rules of the House of Representatives established on December 1, 1890 ruled that: Diet members should wear haori hakama (Japanese formal attire), a flock coat, or a morning coat; should not wear an overcoat or a hat and should not carry an umbrella or a stick; should not smoke; should not read newspapers and books others than necessary reference materials; and should not interfere with others while they are making a speech or reading a document.

Despite the rules, however, not all members always kept their dignity and order. In fact, for many years, the behavior of Diet members during deliberations has attracted much public attention, with people often showing more interest in the members' behavior than in what is being deliberated.

Documents describing various episodes and incidents involving Diet members in deliberation had been published since the Diet's early days. Since the opening of the Diet, diplomats, journalists, and even the general public (if introduced by a Diet member) have been allowed to listen to the deliberations made at the Diet.

Kokkai Bocho Gijo no Kidan vividly describes Diet members in deliberation: how they kept order, how they got confused, how they laughed, and how they got angry.

Following are excerpts from the book:

"The member who gets angry most often is the 22nd member, Ueki Emori. He utters every word in an angry tone and becomes angry very soon. He shouts in resentment, clenches his fist in anger, and threatens others. ... Because he gets angry so often, others are becoming insensitive to his anger. However, he will continue to rage. He had better control his anger."

"Mr. Watanabe appeared on the stage. He said 'ahem' and the audience became quiet. He made a speech as if to defendants."

"The speech of Ozaki Saburo was quite good. Miura Yasushi also spoke fluently. They are both very experienced speakers."

"There are various types of Diet members. Some love to make short or long exhortations like priests. Now, Masatoshi Takagi has agreed with the motion of Mr. Ozaki."

For the history of the Diet buildings and related photos, please access the website of the House of Councillors.