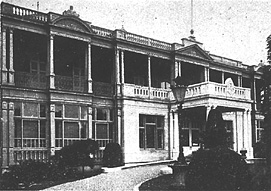 Prior to World War II, the German Embassy was located at the site of the present-day Tokyo Main Library of the National Diet Library.

In July 1860, a diplomatic mission from Prussia known as the Eulenburg Expedition arrived in Japan by ship, landing off the coast of Shinagawa. After several months of negotiations, the Tokugawa government signed a treaty of amity and commerce with Prussia in December of the same year and allowed it to establish a legation in Japan.

After first being established in a foreign settlement in Yokohama, Prussia's legation was later relocated to Azabu in Tokyo. Then, in 1871, just as the Meiji era (1868-1912) was opening, The German Empire was established by Prussia, and the Prussian legation in Japan became that of the German Empire. Subsequently, in 1872, a new legation building was constructed in Nagatacho, Kojimachi-ku (Kojimachi-Ward) (present-day Nagatacho, Chiyoda-ku (Chiyoda-Ward)). The image posted on this webpage is thought to be the Nagatacho legation building. However, that building was flattened in an earthquake in 1894 and a new, two-storey brick building designed by J. Conder was completed in 1897.

The German envoy was later upgraded to ambassador and the legation became a full-scale embassy. A total of 31 design plans for the embassy are stored at the School of Architecture, Kyoto University Faculty of Engineering. You can also view some of the plans (two-dimensional and three-dimensional diagrams of the entire embassy building) on the website of the Center of the History of Japanese Industrial Technology.

The German Embassy faced the postern gate of the War Ministry across Nashinokizaka Street, and the National Diet Building that was completed in 1936 across the boulevard in the south. The embassy thus held a very important location near to Japan's legislative body and military force headquarters. Furthermore, it was also near to the Office of the Prime Minister and to Kasumigaseki, where Japanese governmental agencies were―and still are― concentrated. The embassy therefore served as a convenient place for Germans to conduct intelligence activities in prewar Japan as evidenced by the so-called Sorge Incident involving infamous Russian spy Richard Sorge.

In 1945, in the final stages of World War II, Tokyo was attacked by scores of U.S. B29 strategic bombers and the German Embassy was severely damaged in a fierce attack by the American bombers on the night of May 25.

In 1948, after the end of the war, it was decided to construct a building for the National Diet Library, which was to be newly established, at the former site of the German Embassy. The library was eventually completed in 1961. The library saw books stored in three libraries in Ueno, Miyakezaka, and Akasaka brought together under the one roof in the main building of the National Diet Library in Nagatacho. A new annex was then built in 1986.