5 Military Personnel in the Latter Half of the Meiji Era 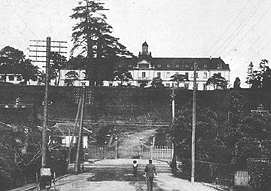 Shikan-Gakko from "The Century Album of Tokyo Views, Japan"

The modernization of Japan's military forces, which consisted of an army and a navy, began when the country established a department to supervise its navy and army on January 17, 1868. After undergoing a number of changes over the next several years, the department was then divided into the War Ministry and the Navy Ministry in 1872. The two ministries respectively supervised the army and navy until they were eventually disbanded in 1940.

Each entity had varying sign-up procedures, which also differed according to the times; whether the country was engaged in war or not affected the recruiting process, as did the actual time period. There were different guidelines for the beginning of the Meiji era (1868-1912), the disarmament movement era in the Taisho era (1912-1926) and the beginning of the Showa era (1926-1989). The following describes the main route for army soldiers and military officers in the period from 1897 to 1907.

The majority of soldiers were conscripted. Those that passed an examination conducted in line with the conscription rules (revised in 1889 and again in 1904) were sent to local army units within their residential areas, where they would serve for three years. At that time, it was considered an honor to get drafted, although those that did generally harbored many worries about military life.

To mitigate their worries, many handbooks were published on the ins and outs of military life. For example, in the section on the oaths and the induction ceremony included in Nyuei Kokoroe Guntai Jitsumu published in 1900, relevant procedures were detailed, including that the inducted should affix his registered personal seal on the written agreement with the army and that if he had no such seal, he should use a thumb print instead. Also, the section warned readers that soldiers' abilities would start being evaluated at the induction ceremony.

Before the three-year service term expired, those who wanted to be promoted to the petty officer class were given a chance to apply for a screening test to receive a further two-year military education.

The army was also in charge of conscripting navy personnel, although most navy members were volunteers.

There were mainly two routes for men wanting to enter the Military Academy, which served as a career path for those wanting to become military officers.

Graduates from the Military Academy returned to their local military units and received six months of on-the-job training as petty officers. Those who passed the unit screening test were then promoted to the position of second lieutenant. Second lieutenants specializing in artillery and engineering were then sent to the army's special school of artillery and engineering to gain further expertise in the relevant fields.

The degree of promotion after becoming an officer depended upon various factors, but gaining entry to the Army War College was a major factor. Candidates for the college were selected from first and second lieutenants who had served for at least two years. The college was supervised by the General Staff Office and students of the college learned high-level military tactics needed to gain further promotion. Several exercise books were published for applicants to the college, including Kio Junen-kan Rikugun Daigakko Nyugaku Shiken Mondai Toanshu Senjutsunobu, which provided exercises on fighting positions and tips for map exercises. In another exercise book titled Rikugun Daigakko Nyugaku Hasshin Shiken Tokai Hei Kenkyu, there was even a section on how to fill in an answer sheet.

* The percentage was calculated by dividing the annual average number of entrants to the school from each prefecture by the population of the prefecture in 1897 (for first to 19th graduates).