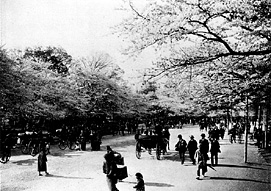 Upon leaving the "Ueno Park" exit of JR Ueno Station, cross the road and you will find the National Museum of Western Art, which houses sculptures by August Rodin, on your right and Tokyo Bunka Kaikan on your left. Passing by these two cultural facilities, you will come across a large open space with a fountain at its center. This space is flanked by the National Science Museum, the Tokyo National Museum, and the Tokyo Metropolitan Art Museum. To the south is the tranquil Shinobazu Pond. Ueno Park, which covers approximately 534,000 square meters, also features a superb stand of cherry tress, a zoo, a five-story pagoda, a mausoleum, a shrine gate as well as statues of bacteriologist Noguchi Hideyo, medical scholar Dr. Bauduwin and influential samurai Saigo Takamori. Although often referred to as a "cultural forest" or a "green oasis" such titles do not do justice to the beauty and long history of Ueno Park.

The area where Ueno Park is located is affectionately known as "Ueno no Yama" (Ueno hill) and sits on the fringe of the Musashino Plateau approximately 20 meters above sea level. Shinobazu Pond, located in the lowland between the Musashino Plateau and Hongodai in the west, was once part of the sea however the area was widely developed and reclaimed following the opening of a new government in Edo by Tokugawa Ieyasu, the founder of the Tokugawa Shogunate.

In 1624, at the direction of high Buddhist priest Tenkai Sojo, construction of Kan'ei-ji Temple was started on Ueno hill to the northeast of Edo Castle, spurring rapid urbanization in the district at the southern foot of the fill. Subsequently, Kan'ei-ji prospered as the Tendai-shu Buddhist sect's head temple in the Kanto region, rivaling the sect's main temple--Hieizan Enryaku--in Kyoto. Kan'ei-ji also served as the family temple of the ruling Tokugawa clan. In its prime, the temple owned land twice the size of present-day Ueno Park and the original temple building had as many as 36 rooms for priests.

However, in 1868, most of the temple's buildings were burned to the ground in the Battle of Ueno fought between the Shogitai troops, who supported the former Tokugawa regime, and troops of the new imperial government. Of the major buildings, only Kiyomizudo Temple, Toshogu--the mausoleum of Tokugawa Ieyasu--, the magnificent five-story pagoda, and few others survived.

At the southern edge of the park near Keisei Ueno Station stands the statue of Saigo Takamori, the samurai who led the imperial troops. In nearby scrub, lies a tombstone for the Shogitai troops on which characters written by famed samurai Yamaoka Tesshu were inscribed. They read: "Tomb of the war dead."

When the battle ended, Kan'ei-ji was closed and its control was transferred to Tokyo Prefecture (the present-day Tokyo metropolitan government). The new Meiji government then drew up plans to construct the Institute of Western Medicine (present-day Faculty of Medicine, The University of Tokyo) at the temple site, but was soon swayed by Dr. Bauduwin, a scholar of Western medicine, who advised the government to build a park instead of a medical school.

Subsequently in 1873, the Grand Council of State (Dajokan) issued the following notice to each prefecture:

"In prefectures including Tokyo, Osaka, and Kyoto, there are places of historic interest, scenic beauty, and recreation and relaxation where people can visit and enjoy themselves, for example the Kinryu-zan Senso-ji Temple and the Higashi Eizan Kan'ei-ji Temple in Tokyo and the Yasakasha Shrine, the Kiyomizu Temple, and Arashiyama in Kyoto. Prefectures having such places, including those previously owned by temples and shrines, shall file an application to the Finance Ministry for permission to transform them into public parks with detailed drawing plans attached to the application form." (Horei Zensho Dai 6 Kan no 1)

Accordingly, Tokyo Prefecture applied to the ministry for permission to build a park in Ueno and in 1876, in the presence of Emperor Meiji, a spectacular opening ceremony for the park was held. Since then, Ueno Park has played an important role in Japan's cultural development as well as the promotion of new industries.

During the Meiji era (1868-1912), the government staged a total of four trade fairs in Ueno Park. A museum, a zoo, and an imperial library were soon opened in quick succession, while Ueno Station was completed as a gateway to the capital for people coming from the Tohoku region--famous tanka poet Ishikawa Takuboku, who was born in Tohoku, later composed a tanka about Ueno Station, in which he mentioned that he liked to visit the station just to listen to the dialect of his hometown.

Horse races were also held at the park in the Shinobazu Pond area. The inaugural race, held on November 1, 1884, was attended by Emperor Meiji. The following excerpt appeared in a Daily Yomiuri article dated November 2, 1884:

"On the first day of the big horserace ... great fireworks were set off 21 times ... . Three decorated boats of the Navy Ministry made a circuit of the pond and then the first race was started. After each race was finished, fireworks were let off and music was played. Although it was a rainy day, many people came to see the horserace and the area was very crowded. A temporary bridge built over the pond was loaded with so many people that it almost fell into the pond. Also, Ueno hill was crowded with people hoping to catch a glimpse of the races. The last race finished at around 6:30 p.m. and then the Emperor departed."

By this time, there remained no trace of the Battle of Ueno, and in the cherry blossom season, people paraded in unique costumes in the park. Teahouses and restaurants were sequentially opened, some of which are still in operation today.

As of 1876, Ueno Park was under the control of the Home Ministry's Museum Bureau. However control was transferred to the Ministry of Agriculture and Commerce in 1881 and to the Imperial Household Ministry in 1886. In 1890, it became an imperial demesne called Ueno Goryochi.

During the Taisho era (1912-26), Ueno Park was the site of Tokyo's first May Day event and was also the venue of a number of exhibitions, including a peace memorial event held to commemorate the Battle of Mukden, the last major land battle of the Russo-Japanese War. According to reports, Maria, a daughter of General Romanov, who fled to Japan after the Russian Revolution, was tasked with attracting customers to a Russian bread stall that was temporarily built for the exhibition.

When the Great Kanto Earthquake struck on September 1, 1923, Ueno Park, which escaped serious damage, served as an evacuation center for local residents. Notices on missing persons were attached to the statue of Saigo Takamori.

In 1924, Ueno Park was gifted to Tokyo City in commemoration of the marriage of the Prince Hirohito, who later became Emperor Showa. From that time on, the park has officially been known as Ueno-Onshi Park.