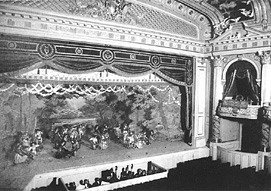 Procenium Front from "Album of the Imperial Theatre"

Teikoku Gekijo (hereinafter, "Teigeki"), or the Imperial Theater, opened in a grand ceremony on March 1, 1911. Its life in its original form, however, was to be short-lived--just over a decade after opening, the theater was partially destroyed by fire following the Great Kanto Earthquake that struck the Kanto region on September 1, 1923. Using part of the original structure, Teigeki was reconstructed and reopened to the public on October 25, 1924.

The accompanying photo shows Teigeki in April 1911, soon after it first opened. The four-story building closely followed the French Renaissance style; its outer wall was made of white decorative brick produced in Inbe, Bizen. A statue of okina (old man), a character from a well-known Japanese Noh play, looked down on visitors from the roof top and served as a symbol of Teigeki. Jijishinpo, dated February 4, 1911, described Teigeki as follows: "The white impressive building has a spectacular appearance and deserves the name 'King of Theaters.'" In addition to the main theater building, there was an annexed art school and also workshops where sets and props were constructed.

Yokogawa Tamisuke, who designed Teigeki, was an architect who attributed great importance to building structure and fittings. In his book Jishin (Earthquake), he examined how the quake resistance of buildings could be improved. This focus and related study in the United States led him to become the first architect to adopt a steel structure for a building in Japan. For Teigeki as well, he used a steel structure, and it was reported that he was not able to procure a sufficient amount of steel in Japan, and the shortfall was brought in from the United Kingdom. In addition to strengthening quake resistance, Yokogawa was also eager to ensure the Teigeki building was highly fire-resistant, and thus equipped it with fire hydrants, fire-proof walls, and conductor rods. This foresight proved a savior when the Great Kanto Earthquake struck--the structure remained standing and there was no fire damage immediately after the temblor. A couple of hours later, however, the building was set ablaze due to a fierce fire that spread from the direction of the Metropolitan Police Department (Tokyo no Gekijo).

The plan to construct a new theater was first conceived at a meeting on January 8, 1906 presided by former Prime Minister Ito Hirobumi. On January 18, a committee to establish the new theater was formed and prominent businessman Shibusawa Eichi was named chairman. Soon after, Shibusawa worked with Kawakami Otojiro, who had met with great success directing overseas performances as a leader of a group of actors and was key in rallying support for the new theater. He approached many influential people of the time, including then Prime Minister Saionji Kinmochi and influential diplomat Hayashi Tadasu, who were also eager to open a new theater. Finally, on March 9, 1907, a company to manage the new theater was established. Although its name included "teikoku" (imperial), Teikoku Gekijo was established not by the imperial government but by the private sector, represented by important businesspersons such as Shibusawa and Okura Kihachiro, who respectively became chairman and director of the theater's managing company.

Those engaged in the establishment of Teigeki aimed to achieve the following three objectives through the new theater, which would be the first truly Western-style theater in Japan: (1) to provide a place where traditional Japanese arts could be introduced to important foreign guests; (2) to provide an example of good theater management; and (3) to become a center for the development of theatrical arts in Japan.

Even for Yokogawa, who believed it was the responsibility of architects to identify and appropriately meet the exact architectural needs of society (Nihon no Kenchiku Meiji Taisho, Showa 7), it was difficult to design a building that could achieve the aforementioned goals. According to the proposal, the theater needed to be equipped with all the fittings necessary to stage traditional Japanese plays such as Kabuki, as well as fittings for operas and other new theater styles.

Thanks to the architect's painstaking efforts, the Teigeki building was indeed a Western-style theater where Kabuki could also be performed. In a Toshinbun article dated March 9, 1911 on "Teikoku Gekijo through the eyes of actors, " Kabuki actors who would perform in the new theater were asked their opinion on the new theater. Responses included, "I am firmly determined to perform at the first stage of the new, biggest theater in Japan" and "I felt embarrassed at the first rehearsal, because the theater was quite different from others."

The opening of Teigeki resulted in a great shift in the way theaters were managed in Japan as well as the services they offered. For example, Teigeki introduced a ticket system under which tickets were sold from 10 days prior to the performance and were delivered to buyers living within Tokyo free of charge. Eating, drinking, and smoking inside the theater building were prohibited (instead a restaurant and a smoking room were opened within the building); male receptionists and female guides were employed; and free brochures on the plays were distributed. While some of these services had already been introduced in other theaters, they had yet to take root and were still largely unfamiliar to the majority of theater-goers. Teigeki, however, succeeded in thoroughly introducing such services and thus serves as a symbol of the modernization of theater in Japan.

Inside the Theater Building

Inside the original Teigeki, the entire layout was perfectly symmetrical, including the seats, ticket booths, lavatories, and break rooms. After passing through the front entrance on the first floor, ticket booths were visible on both sides. After passing by the ticket booths, theater-goers were presented with a grand staircase at the front. Going up the stairs, there was another door, where it is said tickets were examined by theater staff. Going through the door, visitors were led through an impressive hallway fitted with marble columns. Straight on was the first-floor seating, while a cloakroom was located diagonally behind.

The hall on the second floor included a counter and a shop. There was also a dining room just above the main entrance for use as a lounge and a party venue. It featured a high ceiling along with large-scale wall paintings depicting entertainment of each month during the Heian to Meiji periods.

The main hall had about 1,700 seats in total with chairs on the first and second floors and benches on the third and fourth floors, all of which were laid out in a horse shoe shape. The interior wall was colored gold and the ceiling had a magnificent dome-shaped chandelier and a painted picture of nymph reaching to the sky. There was an orchestra pit in front of the stage and the runway was removable.

Overcoming the difficulties caused by the Great Kanto Earthquake, Teigeki prospered again as "Taisho Teigeki." Subsequently, however, the theater encountered a run of bad luck, including a management crisis amid the economic depression and a closure during World War II. Not to be forgotten, Teigeki made a fresh start in a new building that opened on September 20, 1966 and performances have continued ever since. At present, the words of Saionji Kinmochi, who greatly contributed to the establishment of the theater, are posted at the entrance of the theater in tribute to the old Teigeki.