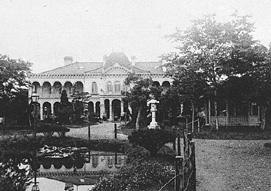 The Rokumei-Kan Club from "Album of Tokio by the Phototypie"

Chiyoda-ku's (Chiyoda Ward) Uchisaiwaicho 1-chome sits inside the Yamashitamon and Saiwaibashimon gates. As a major business center, it is home to many large-scale office and commercial buildings, including the Imperial Hotel, Yamato Life Insurance's head office building, NTT's Hibiya and Kasumigaseki buildings, and the head office buildings of Mizuho Bank and The Tokyo Electric Power Company. During the Edo period (1603-1867), this area was owned by daimyo (feudal lords). It is widely known that Rokumeikan, or Deer Cry Pavilion, was opened at the former premises of daimyo Shimazu in 1883 and was subsequently sold to Kazoku Kaikan (Peers'Club) in 1894. Before Rokumeikan, the land was the site of the Yamashitamonnai Museum.

Yamashitamonnai Museum was originally the base of a secretariat established within the Grand Council of State in February 1872 to lead the Japanese government's preparations for the 1873 Vienna Exposition. Subsequently, in March 1873, the secretariat, Education Ministry departments in charge of museums and libraries, and a state-run botanical garden (present-day Botanical Gardens, Graduate School of Science, University of Tokyo) were merged. But in February 1875, after the Vienna Exposition was over and all related business affairs were settled, the merger was cancelled and the control of the secretariat for the Vienna Exposition was transferred to the Home Ministry. It was at that point that the secretariat buildings were turned into a museum.

The background to the establishment of the museum is detailed in Monbusho Hakubutsukyoku, Hakurankai Jimukyoku Kiroku Meiji 5-8 nen. Located at the former premises of daimyo Shimazu which extended over approximately 58,886 square meters inside the Yamashitamon gate, the museum featured six exhibition pavilions, an animal housing facility, a bear enclosure, a taxidermist, a botanical garden and greenhouses.

In July 1875, immediately after the museum was opened, it was visited by Emperor and Empress Meiji. Their schedule for the day-long visit was recorded as follows and indicates just how big the museum was:

"Their coach and horses will enter the museum through the front gate and stop in front of the pavilion displaying antiques. Then they will see a garden model based on a creation of Mr. Carock in London, United Kingdom, and learn a tree-cultivation method invented by Mr. Heuibreng, a botanist from Vienna. Then they will take a rest. After the rest, they will pass by a stand of trees (if it is rainy, through the corridor between the animal and plant exhibition pavilions) and see the goods brought back from Vienna. Next, they will visit the fourth exhibition pavilion (to see agriculture and forestry-related exhibits), and to the fifth and sixth pavilions (to see industry, art, school-related exhibits and prizes from the Vienna Exposition). In the afternoon, they will visit the second workshop (for yarn-making) to the seventh workshop (for painting, papermaking, drawing, measurement, iron-making, polishing, pottery, and dyeing). If they have some extra time, they will visit the animal, plant, and mineral exhibition pavilions, and the antique exhibition pavilion as well."

The museum guidebook of the time, Kaichu Tokyo Annai, describes the museum as follows:

"It has a collection of one hundred thousand rare things from all over the world. It sells admission tickets to those want to see the collection." (The admission fee was 2 sen) (1 sen = 1/100 yen)

There remains a list of animals raised at the museum as of March 1875 in pages 13 to 15 of Ueno Dobutsuen 100 Nenshi, which was apparently created when the control of the museum was transferred to the Home Ministry. The following animals were listed: monkeys, cats, wildcats, dogs, bears, Japanese raccoons, seals, boar, deer, buffalos, flying squirrels, dormice, rabbits―including some from France, eagles, kits, owls, swans, crows, myna birds, peacocks, pigeons, cranes, turtles, salamanders, bees, snails, and various other animals. Also, it was recorded that a buffalo delivered a baby on September 23, 1874 within the museum. According to the list, there were 70 animals of some 30 species. The facility for animals had a total floor area of 231 square meters. Small animals were probably raised inside the facility, but where the seals, boars, deer, and buffaloes were raised is unknown.

Museum records, mainly in regard to the botanical garden for the period immediately after the museum was opened, include Koshi Zakki, a business diary kept between November 1874 to May 1875 by Onomoto Yoshi, who was dispatched to the museum by the Home Ministry. In addition to the botanical garden, it was planned in July 1874 to grow useful plants (645 items) in 18 districts extending over approximately 1,904 square meters. In the diary, there are sketches of plant seeds and records on planting, inspection, and harvesting. The diary includes interesting comments in addition to plant records, such as "Shibuya Ichiro dug up a gold coin in the vineyard" (supplementary comment on March 18, 1875). The vineyard was likely part of the botanical garden. The golden coin was perhaps a relic of the daimyo. Another comment reads: "I caught seven geese in a pond in front of the gate." (March 19, 1875). The gate must be the eastern gate, because there was a pond to which geese were visiting in front of the eastern gate of the museum.

The museum was eventually expanded and featured 11 exhibition pavilions under the control of the Home Ministry. It also underwent several changes as a governmental organization, including its official name. In April 1881, control of the museum was again transferred to the newly established Agriculture and Commerce Ministry, and the museum was relocated to Ueno in October of the same year. Subsequently in November 1882, Rokumeikan was opened at the former site of the museum's first exhibition pavilion.

Take a walk around Chiyoda-ku, Uchisaiwaicho 1-chome. You can still see a monument to Rokumeikan within the premises of Yamato Life Insurance's head office. It might be nice to try to listen to the cries of bears and seals raised at the museum after thinking about dance parties held at Rokumeikan.