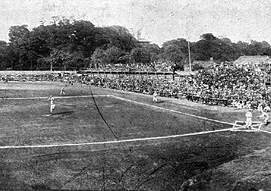 Not everyone, however, was fond of baseball. Some showed animosity toward the sport, despite its rapidly growing popularity. From August 29 to September 19, 1911, Tokyo Asahi Shinbun published a series of anti-baseball articles. The first was based on a comment by Nitobe Inazo, who was then the schoolmaster of the First Higher School.

The article introduced Nitobe's opinion about baseball as follows:

"Playing baseball could be likened to picking a pocket. To play baseball, you must be able to deceive the opposing team and lead them into a trap. You must always sharpen your senses so that you will never miss the chance to steal a base. Although Americans can play such a sport, British and German people cannot play it. The British national sport is football, and to play football, you have to be strong and brave enough to keep the ball without fearing injury. You must keep the ball even if your nose is crooked or your jaw bone is fractured. Americans cannot play such a tough sport. (Tokyo Asahi Shinbun, August 29.)

The now-famous comment "Baseball could be likened to picking a pocket" shows Nitobe's unique view of baseball, and what is interesting is that Nitobe, immediately after criticizing baseball in his comment, praised football, the British national sport, as a tough sport. Because he mentioned "keep the ball, " Nitobe seems to have been referred to rugby union rather than soccer.

The first specialized book on rugby union published in Japan was Rugby-shiki Football edited by the rugby club of Keio Gijuku and published in 1909. At the very beginning of the book, it comments, "Let's play rugby, not baseball!" The book also cited the following quote from Hashido Shin (Website of the Baseball Hall of Fame and Museum): "Rugby may become a very important sport to me. In the future, I will play rugby instead of baseball." Mr. Hashido was an excellent baseball player at Waseda University. In the Intercity Baseball Tournament, an award named after him is awarded to outstanding players. The book went on to criticize baseball and insisted that rugby was superior to baseball in terms of sportsmanship in the section on the virtue of compliance:

"In baseball games, umpires are often pilloried for their judgment and hecklers cause troubles (as in the game between Waseda University and the First Higher School on May 8, 1909). It is really disgusting. Salaries of sumo wrestlers at Kokugikan depend upon the number of their wins and so, to become a winner is very important for their lives. Even so, it would be disgusting to see a sumo wrestler be so concerned about winning. It is therefore really intolerable that students, who should lead their lives in a spirit of chivalry, make complaints to the umpires whom they themselves have chosen. This is something that rugby players will never do."

Thus the book on rugby clearly shows hostility to baseball. This book, published two years before Mr. Nitobe made the aforementioned comment, attempted to highlight the perceived superiority of rugby, a gentlemen's sport, to baseball.

Translation of Baseball and Football

It seems that by 1911, yakyu and shukyu had already been used as definitive translations for baseball and football respectively. As for yakyu, the word first appeared in the section on the outline of baseball in Yakyu , a book written by Chuma Ko and published in 1897, as follows: "Since April 1893, baseball has been played in the field of the First Higher Middle School and so, I have translated baseball into yakyu ('ya' here means 'field' in Japanese and 'kyu' means a ball), as opposed to teikyu (translation of tennis; 'tei' here means `yard')." Mr. Chuma was honored in the Baseball Hall of Fame as the person who first translated baseball as yakyu (

As for football, the person who first translated it as shukyu is unknown. Also, it is unclear which was first translated into shukyu, rugby or soccer. The first specialized book on soccer published in Japan was Association Football edited by the football club of the Tokyo Higher Normal School and published in 1903, in which the word shukyu was not used at all. In the same year, the rugby club of Keio Gijyuku began to call itself Shukyu-bu ("bu" here means a club) and in around 1904, the soccer club of the Tokyo Higher Normal School began to call itself Shukyu-bu. The word shukyu thus became a definitive translation of football (soccer/rugby) at the beginning of the 20th century, but unlike the case of yakyu, there have no decisive materials found in regard to who first translated football as shukyu.

In the aforementioned book Yakyu, there was a section on pitching tactics, in which specific instructions on pitching were given as follows: "Brushback, which gives the batter a scare, is one of the main pitching strategies" and "If you pitch the same type of breaking ball in a row, the batter may successfully guess that ball. It is the most important pitching skill to pitch breaking balls and straight balls in good combination. You should be consistent in the combination of these balls regardless of who is the batter." These instructions, which are still useful, demonstrate that baseball had already become an intellectual sport in Japan as early as in 1897.

On the other hand, in specialized books on soccer or rugby published in the period, there were explanations on rules and each of the positions but there were no specific instructions on tactics as those given in Yakyu. (In Rugby-shiki Footbal, there was a section on tactics, but it was very abstract.) It wasn't until the Taisho era (1912-1926) that books on specific soccer/rugby tactics were first published in Japan.