The Rice Market in Dojima, the Vegetable Market in Tenma , and the Fish Market in Zakoba were three once-bustling big markets of modern Osaka.

The reasons for the development of Osaka's economy are that Osaka was a castle town under the direct supervision of the shogunate, and that its good location for waterway traffic such that it was called the "city of water, " with the Seto Inland Sea in front as well as the Yodo River that connects with Kyoto and the Yamato River that connects with Yamato inland. In addition to these, around the Kanbun era (1661-1673), they opened a westward shipping passage that passes into the Sea of Japan, through the Shimonoseki strait, and then goes through the Seto Inland Sea toward Osaka. The development of marine transport between Osaka and Edo also contributed to the development of Osaka, giving Osaka the pivotal position of the national markets. The center of commodity distribution in Osaka had been the Dojima Rice Market, the Tenma Vegetable Market, and the Zakoba Fish Market. 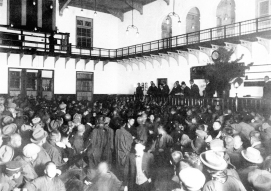 In the Edo period, Samurai had been collecting the compulsory annual rice tribute from farmers. The lord of each clan secured the rice for their own consumption and sold the extra rice to buy commodities. This contributed to the development of the market and the advancement of a currency economy. The markets at which the lords sold rice gathered in Osaka, and rice markets in Osaka became prosperous enough to establish standard nationwide market prices in Japan. Saikaku's "Nippon Eitaigura" describes Yodoya, who founded a rice market in Osaka during the Kanbun era.

Due to Zuiken Kawamura's Dojima River improvement program, the Dojima Shinchi area underwent a land rearrangement. In 1697, Yodoya's rice market moved to Dojima Hamadori 1-chome, and the Dojima Rice Market began. The shogunate had been prohibiting the trade of Kome Kitte (rice certificate, a ticket with which one can obtain rice at warehousing offices, Kurayashiki); however, due to the devaluation of rice in 1716, the trade of Kome Kitte was permitted as a measure to increase the price of rice. At first, this Kome Kitte was aimed at Shomai trade (spot trade of the annual rice tribute), but later in 1730, Choaimai trade (futures trade on paper) was also permitted, so the Dojima Rice Exchange Market (Dojima Kome Soba Kaisho) was established to deal in two types of trade. The market had been active until the end of Edo period, but the destabilization of the shogun's government contributed to the decline of its rice distribution control policy. Thus, the Dojima Rice Market declined and the market was closed in 1869.

In April 1871, Koemon Isono and others started a reconstruction movement, and Dojima Komekaisho (rice market) was opened. In August 1876, Tomoatsu Godai founded a certified limited company Dojima Kome Shokaijo. As they had been using the street in front of their office since the Edo period, they built a new office, opened a market on the side of the shore side and established an account office there. Thus they contributed making the market more suitable to a modern capitalistic system. Soon thereafter, exchange laws were established in October 1893, Dojima Komekaisho changed name to the Osaka Dojima Beikoku Torihikijo. Although the building burnt down in 1909, the association continued to be prosperous. However, due to regulations on the delivery of rice, which came into operation in October 1939, the rice market in Dojima ended up and was absorbed by Nihon Beikoku Kabushikigaisha (tr. Japan Rice Co., Ltd.).

With regard to the origin of place name "Dojima (堂島), " there are two theories. One is that it means an island (島) of temple (堂) because there was a Yakushido established in the 6th century (Source: Kita-ku Shi). And the other is that this place is between two rivers, the Sonezaki River and the Dojima River. In theory, Kawa (川=river) was made analogy to Kawa "革=leather" of the same pronunciation in Japanese, so people compared the location to Do (筒), a barrel of Japanese hand drum, and made an analogy to Do (堂) of the same pronunciation in Japanese (Source: Settsu Meisho Zue Taisei). 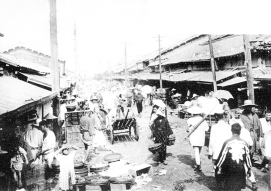 Although the market changed the place several times, the city commissioners' office (Machi Bugyo Sho) gave them permission to move to Tenma (now Tenma 3-chome, an area on the shore side along Okawa River, between the Tenjin Bridge and Tenma Tatsuta-machi) on the last day of July 1653, and the market developed due to the good waterway transport provided by the Yodo River. The market was developed by vegetable growing farm villages in the surrounding area and expanding demand due to the increase in population of Osaka Sango (North Group, South Group, Tenma Group), and exclusively supplied vegetables consumed by Osaka residents. It is said that various vegetables such as komatsuna (Japanese mustard spinach), Japanese honeywort, Japanese parsley, araliaceae, Tennoji turnip, Mibu pot herb mustard, Fushimi-Moso bamboo shoot, Kawachi lotus root, and Citrus Kinokuni were gathered from the ancient capital provinces including Kii, Omi, and Yamashiro, and were offered for sale.

With the increase of the market popularity, there were several movements to build other markets in addition to Tenma, in places such as Dotonbori, Dojima, Horie, and Sonezaki. The Tenma Vegetable Market disrupted these movements by bringing opposition suits, and in 1772, the market paid a Myogagin (contribution) and obtained licenses for 40 wholesale stocks and 150 brokerage stocks. Not only they did not allow making new markets, but also authorized the prohibitions of street sales and the direct sale by local farmers to create a monopoly on vegetables, as a result, kabunakama, the association of merchants, succeeded in completely dominating wholesalers. However, their privileged position did not last long, and in 1798, farmers from local 26 villages established a selling space in the market.

In the Meiji era, vegetable market was freed from regulations, and started to develop rapidly. However, in November 1931, the Tenma Vegetable Market was incorporated into the Osaka Municipal Central Wholesale Market and became one of its supply stations. Like these, the Tenma Vegetable Market had assumed a major role as a center for fresh food distribution, for 290 years until it was damaged by war and finally abolished in May 1945. 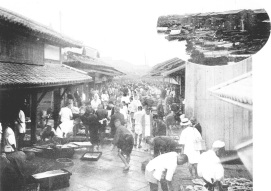 After the Osaka Summer Campaign Siege of May 1615, Osaka became a center for the shogunate to establish a control system for the old capital provinces. Furthermore, a population increase in Osaka due to the move of workers for war reconstruction had changed the area to a big food consuming market.
With the urbanization of Osaka, the community of fish wholesalers changed between places several times, from Tenma Naruo Cho, Motoutsubo-cho, Mototenma-cho (Fushimi-machi), Kamiuoya-machi (Azuchi-machi), and in the period from the Keian era through to the Joo era (1648-1655), the colony was formed in the Sagishima region, close to the harbor filled with crisp air (Source: Zakoba Uoichiba Enkakushi). The region came to be called the "Zakoba" -cho, which means various marine products in Japanese, and it was the Japan's first wholesale market to deal in fresh fish. In the Genroku era (1688-1704), all fresh fish wholesalers moved in this region, and in 1720, it is said to have numbered over 50 wholesalers.

With regard to the kabunakama system (an association of merchants) for fresh fish, 84 certificates for fresh fish were permitted in 1772, and in April 1798, the Ton'yakaisho (chamber of wholesalers) was first established. The Ton'yakaisho had continued until it was incorporated into the Osaka Municipal Central Wholesale Markets on November 11, 1931.

In the Meiji era, the Ton'yakaisho changed its name to "Seigyo Shosha (fresh fish trading company)" and then later to "Uoichiba (fish market)" at the government's instruction, and in 1871, the rules of the market were established and the kabunakama system came to an end. From 1897, they started operations under the name of the 'fresh fish wholesale business company". At the 5th Domestic Industrial Exhibition held in and around the Tennoji Park in 1903, fresh fish wholesalers and shopkeepers exhibited such things as 'artificially refrigerated fish', 'two-story chilled warehouse' and 'conception of fresh fish carrying vessel with an oil engine', all of which is said to have had a great impact on the fresh fish industry, contributing the development of Japan's modern fishery industry. The Zakoba Fish Market was also closed in November, 1931 to be incorporated into the Osaka Municipal Central Wholesale Markets together with the vegetable market.

The place name 'Zakoba' means a place where various marine products gather. 'Ko (喉)' of 'Zakoba' is an ancient suffix to count fish that originated in the fact they carried fish with vine or straw, by sticking it through the fish's gill.