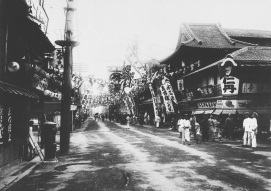 Dotonbori River was excavated from 1612 through 1615. Since a playhouse was first established in this area in 1626, Dotonbori became a town known for theatrical entertainment. It is said that there were 6 Kabuki houses, 5 Joruri (puppet theater) houses, 7 Sekkyo joruri houses, 1 Karakuri puppet play house, 4 traditional Japanese dance (Mai) houses in its prime time. Tea houses stood in a row before the river, and the area was the biggest entertainment district in Osaka during the Edo period. There was a rise and fall in the number of theaters, some of which were destroyed by fire, but the area had been a prosperous theatrical entertainment area even in the Meiji era. The pillars were five theaters: Naka-za, Kado-za, Ebisu-za, Benten-za, and Asahi-za. "Shinai Man'yu Osaka Meishozue" (edited by Eikichi Sakakibara, 1890) describes the area in the mid-Meiji era like this: five theaters play all year round to sold out crowds. There also are performances of Rakugo, Shinnai-bushi, Women Joruri. Tea shops, elegant restaurants, food and drink stalls, and other shops standing between the respective theaters as well as along the river (translation). Later, theatrical entertainment became diversified and new genres including Shimpa (new rival school to Kabuki) and comedy venues emerged, as well as the rise of a new entertainment kinetoscope (cinemas), but the center of entertainment at Dotonbori was always theaters.

In the last year of Meiji era, Yoshijiro Takasu (or Baikei Takasu, 1880-1948), a critic from Osaka, described the appearance of Dotonbori around the time when this photograph was taken, in his writing "Sukecchi Bunshu" (Baikei Takasu, 1912). He showed a strong emotional attachment to this area, saying "Dotonbori and the neighboring areas have many factors that attract me. The attraction is not only Ganjiro's performance, reminiscent of past stars but the atmosphere of the theaters, where the old tower is set up as it was before, together with pictorial signs including banners, flags and small paper lanterns, all of which are smeared in the gay colors which are indicative of Osaka. Slender rectangular lanterns placed before tea shops near theaters, scattered drinking bars, restaurants, signs like "Mamushi" or "Odamaki" at noodle restaurants, sushi shops that sell steamed sushi in winter, Maruman's Kamaboko (fish paste cakes) shop that sells Taimiso (bean and snapper paste), all of which are of Osaka, become factors in invoking the curiosity of people from Tokyo and sharply stimulating their senses of taste and color... (translation)"

The number of theatrical entertainment venues has decreased low in today's Dotonbori, but only "pictorial signs smeared in the impressive colors of Osaka" and the scenery that "sharply stimulates the senses of taste and color" may stand out, regardless of its properness. However, it is what has survived of the original scenery of the theater town, Dotonbori. You will feel the extremely impressive-but soft and calm feeling exhibited in the pictures of those days.

Stage of Theater ― Ikutama and Kozu

Dotonbori was a town of theater, and at the same time, it was a stage of theater.

For example, Dotonbori and the neighboring areas often appear in Ningyo Joruri (Puppet Theater) performances given at Takemoto-za and Toyotake-za in Dotonbori. For that reason, seeing a play at Dotonbori gives us a superior experience because "the audience is actually there and watching a play in the actual location, they will feel the full reality of the scene (translation)" (a description from the previously mentioned book by Takasu).

There are many shrines and temples around Dotonbori. Among them, the Ikutama (Ikukunitama) Shrine and the Kozu Shrine (Kozugu) within a 10 minute walk of each other are major shrines of the city. Even today, the insides of the shrines are amazingly quiet, in sharp contrast to the boisterousness of Dotonbori. These shrines used to be a stage of theatrical entertainment. Examples from among many Joruri works, the opening scene "In front of the Ikutama Shrine" of "Sonezaki Shinju, " the first Shinjyu-mono play of Chikamatsu Monzaemon, was a scene set in front of Ikutama Shrine, and the play "Natsu Matsuri Naniwa Kagami" takes its motif from Kozu Shrine's summer festival.

Deities worshipped at the Ikutama Shrine are Ikukunitama ookami (Ikushima no Kami) and Tarukunitama ookami (Tarushima no Kami), and the shrine is an old shrine listed in the Engishiki (a list of shrines of Japan). Toyotomi Hideyoshi moved the shrine to its current location. The shrine gathered many believers as a tutelary deity of Osaka since ancient times. The six deities worshipped at the Kozu Shrine, include Emperor Nintoku. It is said that the site of this shrine is the place where Prince Shotoku built a holy mausoleum for Emperor Nintoku. The shrine also gathered many believers and was famous for its plum trees.

Both shrines were also known for their excellent scenery. Osaka Meishoki (edited by Sanjin Doraku, 1901) refers to the Ikutama Shrine as follows: there is a stage on the overhanging cliff behind the main shrine, and there I had a commanding view of the city through a telescope. I could take in the whole view of the rooftops of the entire city, and Awaji Island and the mountains of the distant Harima. As for the Kozu Shrine, it mentions: the shrine's premise, a mound, stands in the east of Dotonbori...there is a stage in the west side of the main shrine and the view from there is excellent. I could see the bustle of Dotonbori below and the whole city and distant ocean surface (translation).

Now, commercial buildings and apartment buildings stand, right up to the shrine, cutting off the view from the shrine. Nevertheless, we can easily imagine the view that once possible in the Meiji era without any high-rise buildings, from the pictures of those days. For example, "Osaka Meisho" (painted by Tadahisa Watanabe, 1891) and "Nihon no Meisho" (edited by Mitsuyuki Segawa, 1900) includes scenic photos taken from the Kozu Shrine.

The excellent view stems from its location at the western edge of the Uemachi Plateau. In passing, the western edge of the Uemachi Plateau is lined with temple towns from north to south, from around the Kozu Shrine and Ikutama Shrine to Shitennoji. These areas have a plenty of greenery despite being downtown, and there still exist some unexpected items which are reminiscent of the past. Many sites in and around this area formed the settings of theaters. A leisure walk in this area, a good out-of-the-way place in downtown Osaka, is good entertainment for theater lovers.

The main shrine of Ikutama Shrine was almost completely destroyed by a large fire which occurred in Minami-ku (Minami Ward) in 1912. It was soon reconstructed, but burnt again in 1945 by the Second World War, and was again reconstructed after the war. The main shrine of the Kozu Shrine was also destructed by the War and was reconstructed after the war. It may be difficult to feel the original attachment to the concrete structured shrine. A walk in this town will get you into the feel of it, you can feel the presence of Ohatsu, Tokubei, Danshichi, Kurobei, Tsurifunesabu and other Bunraku characters, who are still continue in this town.