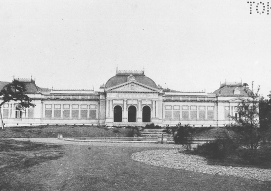 Imperial Household Museum from "The Picturesque Sceneries in Kioto"

This picture was taken circa 1910, when the building was the Imperial Household Museum of Kyoto. It remains as it was, today.

The designer Tokuma Katayama was among one of the first graduates from the Building-Engineering Department of the Engineering College (Kobu Daigakko, now the Faculty of Engineering of Tokyo University). He studied under J.Conder, who designed the Rokumeikan and built the foundation for modern Japanese architecture. After graduating from college in 1879, Katayama served as an architect for the Imperial Household Ministry.

Katayama's best known work, the Crown Prince's Palace in Akasaka completed in 1909 (Akasaka Rikyu, now serving as Geihinkan (State Guesthouse)), is a marvelous French Baroque style palace, and is notable as a memorial construction where all western architecture techniques in Japan were integrated. The National Diet Library was temporarily housed in this palace from its establishment in 1948 until 1961 (History of our library).

The Imperial Household Museum of Kyoto also has a glorious, palace-like structure, which is said to be classical and the quintessential work of Katayama who had spent all his life in the design of palaces and government buildings. On the triangular pediment above the front entrance, two sculptures of Buddhist idols of the arts, Visvakarman (Bishukatsuma) and Gigeiten, were placed to symbolize the Museum. Doric-order pilasters made of white sawada-ishi and a black Mansard roof with an elegant French curve atop a redbrick wall stands out in the gentle green backdrop of Higashiyama, providing a beautiful contrast of colors. There are 17 rooms in the building, all of which are elaborately-detailed and especially notable is the Main Hall, which was intended to be a temporary throne room when the Emperor visited the museum. The hall is colonnaded, painted with white plaster, creating a solemn atmosphere of being in an ancient Greek place. In those days, large windows in the ceiling let in light, although it is now sealed.

The Imperial Household Museum of Kyoto is one of the best Western-style buildings that have been standing in Kyoto since the Meiji Era. You can see in a "historic sights" guidebook published in the Meiji Era that the museum is a solid and magnificent structure. On the other hand, Hideo Mamizu, who designed the Imperial Library (now International Library of Children's Literature), said that Katayama designed this building without creating a distinctive style of his own and just adopted Western styles, and his design was monotonous because the rooms located in the corners were all designed in a same manner. Then Mamizu criticized the building for not being a superior work although Katayama had generated many superior designs, and the notability of that building in the Kansai Area was not due to its excellence of design but because there were no other similar buildings.

Katayama was labeled as one of the "big three in the Meiji construction world", together with Kingo Tatsuno who was a notable in the academic, education, and private sectors with Yorinaka Tsumaki who was active in government building construction. Tatsuno is famous as the designer of Tokyo Station Building and he attended the Engineering College in the same year as Katayama. Tsumaki is famous as the designer of Tokyo Prefectural Government Building and he also was an underclassman of Katayama at the College. These three focused on different styles: Katayama pursued the French-style; Tatsuno pursued the British-style; Tsumaki pursued the German-style.

In the Kansai Area, some of their works still exist, for example including Katayama's Imperial Museum of Nara and Ise Jingu Chokokan(Website of the Jingu Museum (Japanese)), Tatsuno's Bank of Japan Osaka Branch and Bank of Japan Kyoto Branch, and Tsumaki's Marusan Beer Plant (now the Red Brick Building in Handa (Website of the Handa City(Japanese))). Furthermore, even now, you can see the magnificent works of Katayama by visiting the three museums from prewar era; the Kyoto National Museum, the Nara National Museum, and Tokyo Hyokeikan. All of these museums provide distinctly different atmospheres. 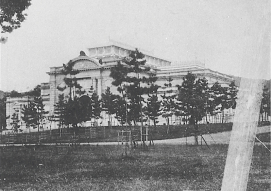 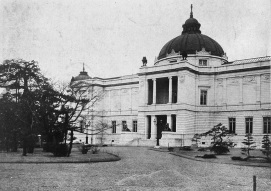 Hyokeikan from "Scenes in the Eastern Capital of Japan"