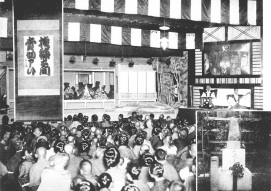 This is a picture of a performance at Goryo Bunrakuza, which once existed at the Goryo Shrine (current address is Awaji-cho 5-chome, Chuo-ku (Chuo Ward), Osaka-shi(Osaka City)) from 1884 to 1926. The audience looks engaged, indulging themselves in the world of Ningyo Joruri (traditional Japanese puppet theater), but Goryo Bunrakuza was not just a place to watch theater. For shopkeepers of large shops, it was also a place to interact socially and to have business discussions.

In front of Goryo Bunrakuza, a pictorial sign was placed, when going through the wood gate, there was an entry fee box on the right and an entrance to a tea shop on the left. Guest seating was on the first and second floors, and there were partitioned booth seats in the pit of the first floor and box seats on the both sides. The theater could seat an audience of about 750 and 7 large lamps lit up the 13 meter-wide stage. The book "History of Ningyo Joruri" reports that tea shop attendants would carry kotatsu, a low, wooden table frame covered by a futon to seat in winter, if an order was placed, and watching a play while drinking hot sake was considered very fashionable entertainment in those times.

The word 'Bunraku' is now synonymous to 'Ningyo Joruri', but it used to be the name of the Ningyo Joruri performance by Uemura Bunrakuken, or the name of a playhouse in which he performed his Ningyo Joruri. The name 'Uemura Bunrakuken' was more of a pseudonym than a name. Bunrakuken I was from Awaji, where Ningyo Joruri enjoyed more popularity than in Osaka. He came to Osaka and opened a training school of Joruri, which is said to be the origin of 'Bunraku." There are several opinions about the exact year, but it was at the beginning of the 19th century in the era of the eleventh shogun, Tokugawa Ienari.

In 1811, the second Bunrakuken moved his base to Nanba Shrine in Osaka's Bakuro-machi and started to perform there. The play is commonly called 'Inari no Shibai (Performance at Inari).' Public performances at temples and shrines were an established genre, as it had been called Miyashibai or Miyajishibai. (Temple Play or Shrine Play) One of the reasons of its development may have been the exceptional handling of the performances held in the premises of temples and shrines, although public performances before the Meiji era had been administrated by giving a license called Nadai (Note 1). They could perform without that license at temples and shrines under the premise of a contribution to the prosperity of the temple or shrine.

In May 1842, Roju Tadakuni Mizuno (senior councilor of the Tokugawa government) imposed a ban on Miyashibai in the Tempo Reforms, so the troupe had to move from the Nanba Shrine for a while, but in September 1856, they were able to return to the shrine. The manager of the troupe around that time was said to be Bunrakuo (Note 2), who was said to be renowned as a competent producer among the successive Bunrakuken.

In the Meiji era, the Osaka City office invited Kagai (gay quarters of the city) and theaters to Matsushima, which had inconvenient access, in order to vitalize this area. Bunrakuo moved his troupe to Matsushima in view of the situation and promoted the troupe with a sign stating "Kankyo Ningyo Joruri Bunrakuza (Authorized Puppet Theater Bunrakuza)" in January 1872. This is the first public use of the name "Bunrakuza." Bunrakuza in Matsushima had been strengthening its popularity despite some bitter situations including a decrease in the audience and a crisis of losing experienced performers.

In 1884, a group of experienced performers who had a conflict with Bunrakuo left the troupe and started Hikorokuza at Nanba Shrine, where there used to be a Bunrakuken playhouse, by gathering non-Bunraku faction members. On the other hand, Bunrakuo bought Tsuchida -seki at the Goryo Shrine, which was located in a more accessible place than Matsushima, and built a new playhouse and opened "Goryo Bunrakuza, " to compete with Hikorokuza. Goryo Bunrakuza and Hikorokuza existed within 1 kilometer north and south of each other and their competition was so severe that it divided the Ningyo Joruri world and as a result of this competition, their artistry was greatly enhanced and a great number of masters appeared. The era is called the golden age of Meiji Ningyo Joruri.

Hikorokuza ceased its operations in the fall of 1893. A series of misfortunes such as a fire in 1888, the death of a star performer, and the departure of experienced performers forced them to close their business, though they had actively made efforts to rejuvenate their operation by placing Tatami mats on guest seats, creating new performances and remakes of their play. In 1894, it reappeared as Inariza, but in 1898, it was again dissolved due to the sudden death of Danpei Toyozawa, a shamisen master. In the years that were to follow until the Taisho era, they had tried to compete with Bunrakuza by performing in different places, but they finally lost their base of operations.

Meanwhile, Goryo Bunrakuza increased the number of performance days and soared into good times with large audiences attending. In 1903, Takemoto Koshijidayu II received the official name Settsudaijo and the announcement performances were sold out every day. Futo Mizutani's "Takemoto Settsudaijo" illustrates Takemoto Settsudaijo's life story and his performance at Bunrakuza in detail. Furthermore, Takemoto Settsudaijo himself wrote a book, "Gidayu no Kokoroe", where he was in favor of the trend toward the introduction of French style architecture or equipment of gas and electricity to playhouse, saying that it was substantial progress in the theatrical entertainment world. With regard to Goryo Bunrakuza, he also commented that they should apply western architecture derived from scientific acoustic principles which would convey their voice better and further to every corner.

However, new forms of public entertainment including new theaters and films created in the course of this modernization became a factor in the gradual decline of Goryo Bunrakuza's business. Finally in March 1909, the management rights of Goryo Bunrakuza were transferred to Matsu Take Partnership corporation (later Shochiku Co., Ltd.), a growing entertainment concern of that time. Shochiku conducted several reforms such as the enhancement of facilities and changes in the performance times, which for a time attracted guests to their theater, but they again lost interest in the late Taisho era and Goryo Bunrakuza faced an extremely difficult managerial era.

The fire of November 1926 burned down Goryo Bunrakuza together with its puppets and costumes, which was a blow to their already worsened condition. However, they patiently kept performing Bunraku during these adverse conditions and Bunrakuza reopened in Yotsubashi, Nishi-ku (Nishi Ward), in January 1930. The Bunrakuza in Yotsubashi burned down in March 1945 due to an air raid; however, was reconstructed soon after the war. In February 1946, a performance in celebration of its revival was conducted there.

In 1949, Bunraku was divided into two factions; Chinamikai and Mitsuwakai seeking labor conditions. The Chinamikai under control of Shochiku moved its base from Yotsubashi to Dotonbori (later changing its name to "Asahiza") in 1956, meanwhile, the Mitsuwakai kept alive by its performance tours.

In April 1963, both parties agreed to incorporate and establish an incorporated Bunraku Kyokai foundation. Bunraku was transferred from Shochiku Co., Ltd. to be managed with support from the national government, Osaka-fu(Osaka Prefecture), Osaka-shi, NHK, and financial interests in Kansai. In April 1984, the National Bunraku Theatre opened in Nipponbashi, Osaka, and became the main venue of Bunraku that replaces Asahiza.

On November 7, 2003, in "the 2nd Convention for the Safeguarding of Intangible Cultural Heritage of Humanity, " Ningyo Joruri Bunraku was chosen as one of the UNESCO's Intangible Heritage items, for its excellence. This may be evidence that Bunraku has an attraction that transcends time, place, or cultural background.

Bunraku, which developed with the continual popularity among the people of Osaka will now be passed on to the contemporary world.