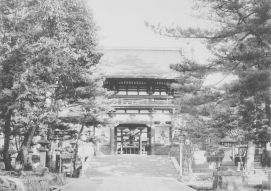 Boarding a Nara Line local train from JR Kyoto Station, you will arrive at Inari Station in about five minutes. The Tokaido Line provisionally started operation in 1879, due to the completion of the railroad from Kyoto to Otani Station located at the northeast edge of the Yamashina Basin, when Inari Station was the next station to Kyoto, but now it is the second station from Kyoto, with the addition of Tofukuji Station between them. In 1921, when the route of the Tokaido Line was changed due to the opening of the Higashiyama Tunnel, Inari Station was excluded from the Tokaido Line and became a station on the Nara Line. In the vermilion-lacquered premise, there still remains a "lamp hut", the oldest one from the former Japan National Railway era, designated as a quasi-railway monument. On the side of the platform, the Lake Biwa Canal (the Kamo River Canal) runs parallel to the railroad. The canal construction started in November 1892 and completed in September 1894 (Website of the Kyoto City Waterworks Bureau (Japanese)).

Going out of the ticket wicket, the front approach to Fushimi Inari Taisha is visible, a straight road toward the main shrine. The scenery remains unchanged, even if compared to a woodblock print or any pictures. The foxes placed just before the grand gate, like guardian dogs (komainu), are the embodied messengers of the Inari god. Statues of fox have been strongly associated with Inari god, as seen in joruri "Yoshitsune senbon-zakura." In the play, Tadanobu Sato, an incarnation of a little fox, first appears on the scene of Fushimi Inari. A Japanese word "Inari-zushi", which is a pouch of a thin fried slice of tofu stuffed with sweeten, vinegared rice, derived from the episode that foxes like Aburaage (the thin fried slice of tofu).

Mt. Inari, standing behind the main shrine of Fushimi Inari Taisha, is the most southern mountain of the Thirty-six Peaks of the Higashiyama Mountains that borders the eastern side of the Kyoto Basin. Some ten thousand Torii (row of vermilion-lacquered Torii, gate-like structure specific to Shinto shrine) stand in a row over the road from the shrine to the top of the mountain (Ake-no Torii). These Torii were donations from all over the country for a wish or to express thanks to the Inari god. Also, Mt. Inari has private worship places for specific individuals or groups, such as "Shinseki (holly remain)" and "Otsuka (stone symbolizing one's belief)".

People seem to have already been visiting Mt. Inari for worship since the Heian period, saying "Oyamameguri" or "Oyama-suru" (both mean "go to the mountain"). In Makurano Soshi, there is a section titled "Urayamashige Narumono (enviable things)", where the writer says, "I visited Inari Shrine on a whim. Around the halfway to the shrine, though it was really difficult to reach, I continued to climb suppressing my discomfort. Late comers passed me one after another, showing no fatigue, and they made a pilgrimage to the shrine before me. They were really amazing. (translation)" (Note 1 ). Even today, Inari Taisha becomes very crowded with hundreds of thousands of people, during the New Year's Holidays and on the "Hatsu Uma (first Horse)" day in February (Note 2 ). Inari belief is widespread throughout Japan, and you will often see Inari statues placed on building rooftop or in a corner of a housing lot.

There are many souvenir shops along the rear approach (Shinko Michi) running from the main shrine to Fushimi Inari Station on the Keihan Line. Ango Sakaguchi, a writer who had stayed at a house on the western side of the JR Inari Station (current Inaritoriimae-cho, Fushimi-ku, Kyoto-shi) from February 1937, wrote that: "Areas around Fushimi Inari would be the cheapest place to live in Kyoto. Even on normal days, numerous people visited the shrine because Fushimi Inari was the source and origin of Inari belief. Many shops for visitors to the shrine lined the street running from the shrine to Inari Station on the Keihan Line. A typical souvenir was the Fushimi Doll, and the majority of shops were restaurants serving chicken (Note 3)." Fushimi Doll is a clay doll whose originator is said to be Hajibe who settled in Fukakusa before the Nara period. Hajibe is a tribe who was notable for their skills in making Haniwa (a clay image placed in ancient burial mounds) and earthenware. The doll was made of clay from Mt. Inari, and was distributed widely, not only in old capital provinces but to Shikoku and Kyushu. The doll became the precursor of clay dolls that number approximately 90 types nationwide, such as Hakata Doll, Tsutsumi Doll of Sendai and Nakano Doll of Shinshu. The specialty of Inari that ranks highly with the Fushimi Doll is 'roasted sparrow'. They cut open the back of a sparrow to roast. While you are walking along the approach to the shrine, you will see these roasted sparrows for sale in the store fronts.

In the area Ango had lived, there is a road called "Shidankaido" running from north to south, leaving a trace of those days when this area was a military station for the 16th Division of the Imperial Japanese Army such as the 38th Infantry Regiment. According to the transfer of the Division to this area in 1908, Fukakusa changed from a grassy farm village to a town crowded with thousands of soldiers. This led to the birth of Fushimi-shi (Fushimi City) in 1929.