Journalist, philosopher and historian. Born in Ishikawa, the son of a Confucian doctor serving in the Kanazawa Clan. He graduated from the Department of Philosophy at the University of Tokyo in 1883. Miyake helped found the Seikyosha (Society for Political Education) and its magazine, "Nihonjin" (The Japanese), where he advocated Kokusui shugi(pure nationalism) through such writings as "Shinzenbi Nihonjin" (Goodness, truth and beauty of Japanese) and "Giakushu Nihonjin" (False, evil and ugly Japanese) (1891). In 1907, the "Nihon" (The Japan) was renamed "Nihon oyobi Nihonjin" (Japan and the Japanese), and Miyake became its chief editor. He also founded the magazine "Gakan" in 1923. His main writings as philosopher include "Tetsugakukenteki" (1889) and "Uchu" (The Universe) (1909). He continued to write a detailed chronicle of modern history called "Do jidai kan" until the last year of his life. He received the Order of Culture in 1943. 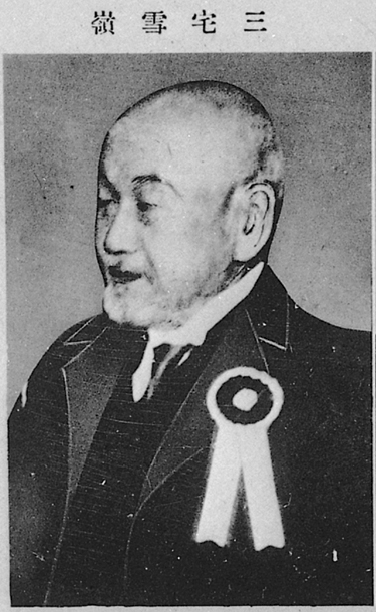