Special topic: Role of the national libraries in the Asia and Oceania region

The Roles and Functions of the National Library of China

The roles and functions of national libraries around the world vary due to different social, political and cultural conditions, as well as national systems and political structures. Based on the relevant provisions of the Public Library Law of the People's Republic of China, this article introduces the roles and functions of the National Library of China (NLC) in 8 areas, such as preservation of literature and information resources, compilation of national bibliography and union catalogue, service to national legislation and decision-making, organizing protection of ancient books, research on library development, engaging in international exchange, providing professional guidance and technical support for other libraries, and undertaking functions of the public library. Furthermore, this article underlines the related work carried out by the NLC according to these functions.

The roles and functions of national libraries around the world vary due to different social, political and cultural conditions, as well as national systems and political structures. According to International Library Statistics, a national library is responsible for acquiring and conserving copies of all relevant documents published in the country in which the library is located, playing the role of a legal deposit institution.

The National Library of China (NLC) serves as the repository of the nation's publications, national bibliographic center, national center for preservation and conservation of ancient books, and national museum of classic books. The major functions of the NLC include: collecting and preserving domestic and foreign publications; coordinating document preservation and conservation; providing information and reference services to the central government, national authorities, social organizations, and the general public; carrying out research on the theories of library science and development of librarianship, and providing guidance to other domestic libraries; and participating in the activities of the International Federation of Library Associations and Institutions (IFLA) and other related international organizations, as well as promoting exchanges and cooperation with other libraries in China and abroad. 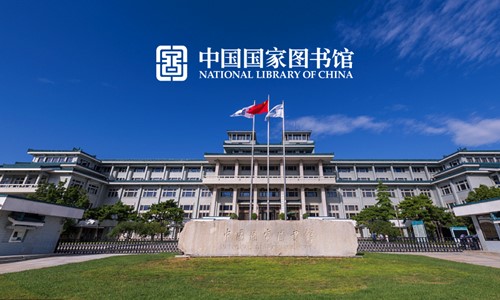 On January 1st, 2018, the Public Library Law of the People's Republic of China came into force. It clearly defines that "the Nation establishes a National Library, which mainly undertakes the functions of preservation of documents and information, compilation of national bibliography and union catalogue, providing services to national legislation and decision-making, organizing ancient books preservation, carrying out research on library development and international exchanges, and providing guidance and technical support to other libraries in China. The National Library also undertakes the functions of public libraries as stipulated in this law."

I. Preservation of literature and information resources

The NLC is the repository of the nation's publications and information resources. In order to properly preserve national cultural heritage, the NLC adheres to the principle of "comprehensive collection of Chinese publication and information resources," collecting documents in various types and carriers published in China to ensure the completeness of the varieties and versions, and in the meantime enriching the collections of publications from Hong Kong, Macao, Taiwan and abroad. On the other hand, the NLC aims to permanently preserve and conserve publications and information resources, and built a national center and reserve of strategic preservation for document resources. The NLC receives legal deposit copies from publishers and properly preserves them in accordance with the relevant provisions of the government. In recent years, the multi-dimensional collection system of the NLC has been further improved. By the end of 2021, the collection had reached 42.30 million volumes/items, and digital resources had reached 2,497.98 TB.

The NLC is the national bibliographic center, which is responsible for compiling the national bibliography, providing a catalogue of various documents published in China. At the same time, it has built a national union cataloguing center (Online Library Cataloging Center) to jointly provide catalogues with other libraries, strengthen the integrated disclosure and unified retrieval of various types of literature information, and promote the open access and sharing of collections in public libraries nationwide. In recent years, the NLC has been keeping up with the development trend of the social information context to study and improve the harvesting, collection and maintenance regulations of various types of literature information, and actively promote the development of the national bibliography and union catalogue. As a result, the coordination and compatibility of traditional media resources and digital resources has gradually improved, and the abilities of the library in organizing, processing, integrating, disclosing, preserving and conserving literature information have been further enhanced. 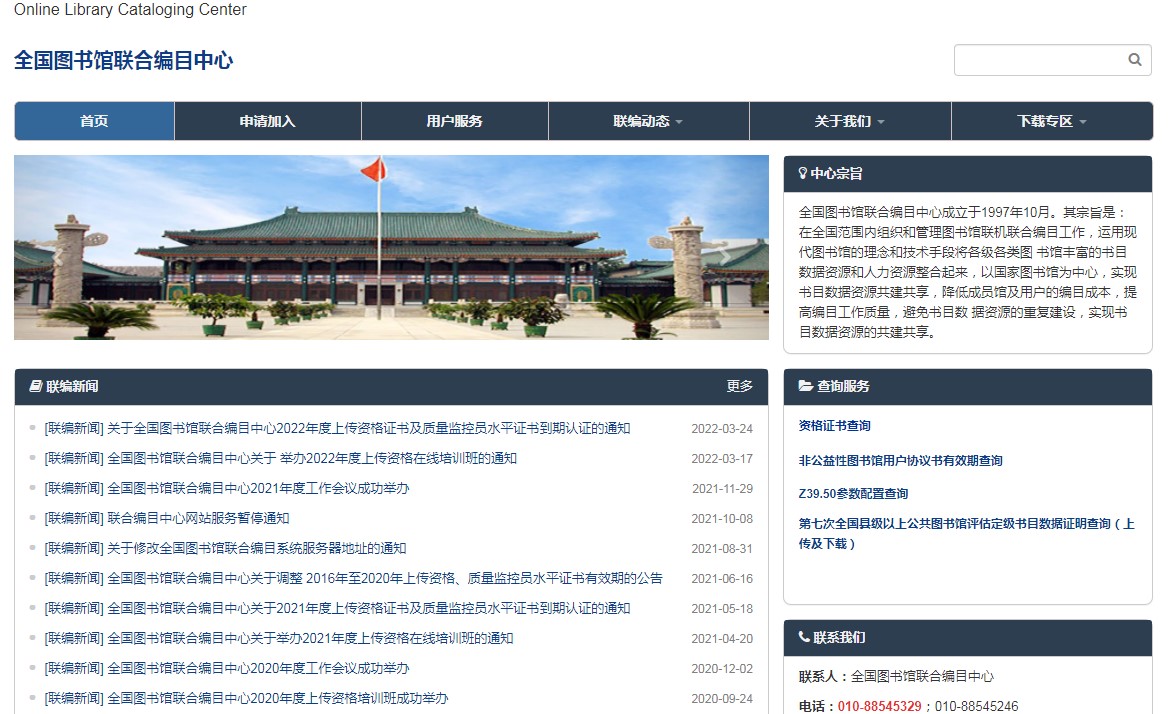 The NLC provides reference and information services for the national legislation and decision-making agencies. In 2021, reference services of 1,681 cases, 476 volumes of public opinion, and 518 volumes of special reports on economy, culture, diplomacy, national defense, civil affairs and overseas China-related research were provided for the legislation and decision-making. 12 lectures on history and culture for ministerial level officials were organized online. The construction of branch libraries in the ministries was well under way. The service platform for the Chinese People's Political Consultative Conference (CPPCC) National Committee was upgraded and transformed. The website of the overseas China studies information center was created, and the service products and delivery channels for legislation and decision-making were further expanded and optimized. Among them, "Provide information and reference services for legislative decision-making agencies on epidemic prevention and control, and conduct special research around topics such as public safety system construction, public health agency emergency capabilities, national strategic material reserve systems, boosting economic development, and international epidemic response cooperation" was honored as a health related best practice in the analysis report Survey Impact COVID-19 jointly issued by CDNL and IFLA in April 2020.

In May 2007, the NLC established the National Center for Conservation and Preservation of Ancient Books. In collaboration with other collecting institutions nationwide, the library improved the overall protection of ancient books by creating and improving the national mechanism for the protection of ancient books, training library professionals, and carrying out in-depth surveys and registration, protection and restoration, collation and publication, as well as research and utilization of ancient books. In 2021, the NLC pushed forward key cultural projects such as the Chinese Ancient Books Protection Plan and the Protection Plan for the Documents of Minguo Period, promoted the construction of the National Museum of Classic Books with high standards, and continuously improved the preservation, protection, collation, research, interpretation, utilization and dissemination of classic books. As a result, the values of those collections in serving society have been further highlighted. 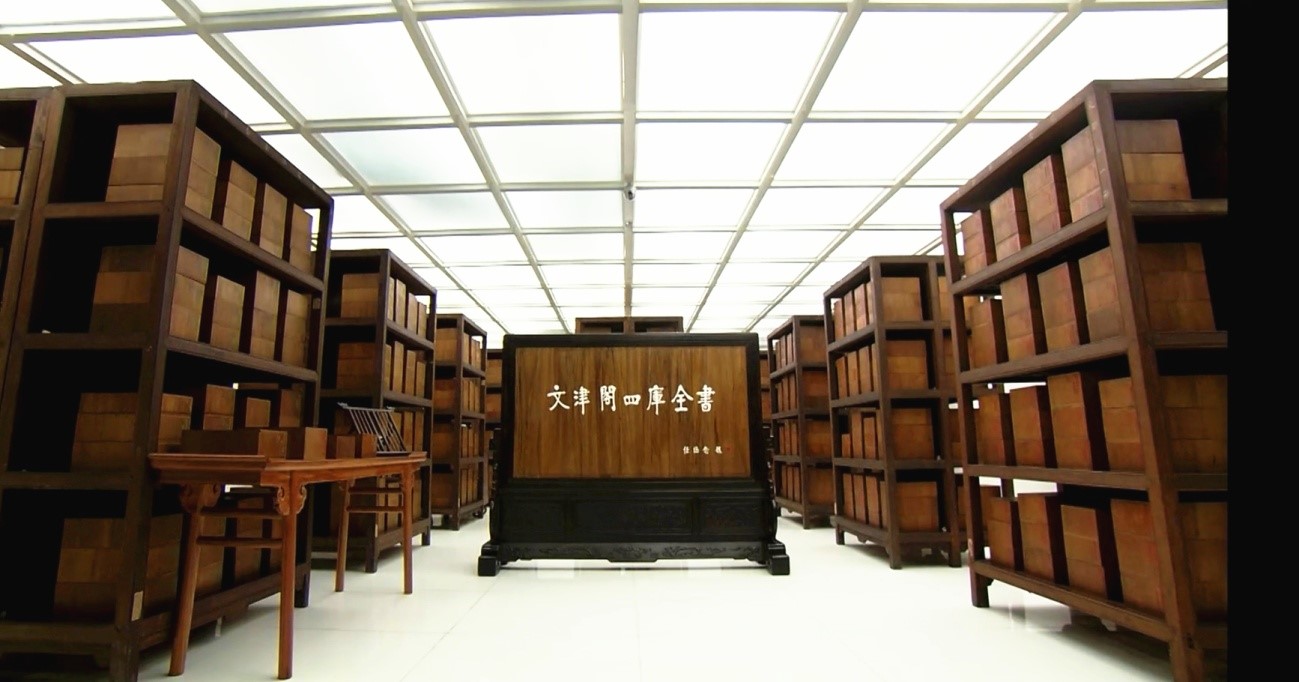 The NLC is the national research center for library development. Through conducting research on librarianship, formulating standards and norms, and working with other libraries, the NLC has contributed to innovation in key areas of librarianship. The NLC has also organized surveys and research around major issues in the development of librarianship, providing theoretical support and references for the nation to formulate and implement laws, plans, policies and standards for libraries. In 2021, the NLC actively participated in various scientific research projects, winning national funds for 4 projects and provincial/ministerial funds for 1 project, and completing 12 NLC scientific research projects, 1 research project on culture, art and tourism, and 2 social science projects supported by the National Social Science Foundation.

The NLC represents and leads the Chinese library community in international library affairs, and strengthens exchanges and cooperation with libraries in other countries through projects, professional exchanges, and mutual visits to jointly promote the progress of global librarianship. The NLC implements relevant intergovernmental cultural agreements and promotes cultural exchanges between China and other countries, making positive contributions to the development of multiculturalism in the world. In addition, the NLC also serves as the ISSN China Center, the IFLA-PAC China Center, the IFLA Chinese Language Center, and the UN Depository Library. In recent years, the NLC has been following the concept of coordinated, open and shared development to actively expand exchanges and cooperation with various types of libraries and information service institutions abroad, thus making great progress in international exchanges and cooperation, and increasing its global voice.

VII. Providing professional guidance and technical support for other libraries

The NLC was established by the central government. It has natural advantages in collecting publications and information resources, facilities and equipment, software and hardware systems, and library professionals. Therefore, it should give full play to those advantages and help libraries of all levels and types to improve their business and services by building a cooperation platform, providing training and mentoring, and developing standards and business norms. In 2021, the NLC organized the Seminar for the Development of Public Digital Culture to coordinate the construction of projects nationwide; formulated guidelines for the development of resources of smart libraries, supporting and guiding local libraries to continuously enrich the collections of smart libraries; and held webinars to provide professional guidance to more than 2,000 provincial and municipal library management team members.

Besides the above-mentioned functions, the NLC also undertakes the functions of public libraries, collecting and properly preserving all kinds of documents and materials, serving the public in the spirit of equality, openness and sharing, and promoting reading and social education. In 2021, the NLC received 1.647 million on-site visitors, nearly 1.13 billion visits on the website and 93.32 million visits on mobile devices throughout the year; circulated 7.456 million copies of documents; held 1,616 exhibitions, lectures and training sessions, and 79 performances; and provided 604,000 reference services for readers.